How to compute arctangent if you live in the 18th century

Michael Lugo wrote a great post, following an idea of Andrew Gelman, about what would have happened if Pythagoras had known linear regresson.  Punchline:  he would have found a linear formula for the hypotenuse with an R^2 of 0.9995, and would surely not have seen any need to pursue the matter any further!

I thought this was mostly just a joke, until the mail brought me a copy of the very interesting A Wealth of Numbers from Princeton University Press, an anthology of popular writing about math stretching from the 16th century to the present.

From Hugh Worthington’s 1780 textbook, The Resolution of Triangles:

THE THIRD CASE is, the sides being given, to find the angles, and the rule is as follows.  “Half the longer of the two legs added to the hypotenuse, is always in proportion to 86, as the shorter leg is to its opposite angle.”

In modern language:  given a right triangle with legs a and b, and hypotenuse 1, how do you find the angle x adjacent to a?  Nowadays we would just say “x = arctan b/a.”  But this kind of computation was presumably not so easy in 1780.  Instead, Worthington offers the approximation

which (after converting to radians, as good manners requires) gives

Of course, when the hypotenuse is set to 1, we have b = sin x and a = cos x.  So the approximation is

This turns out to be a pretty awesome approximation! 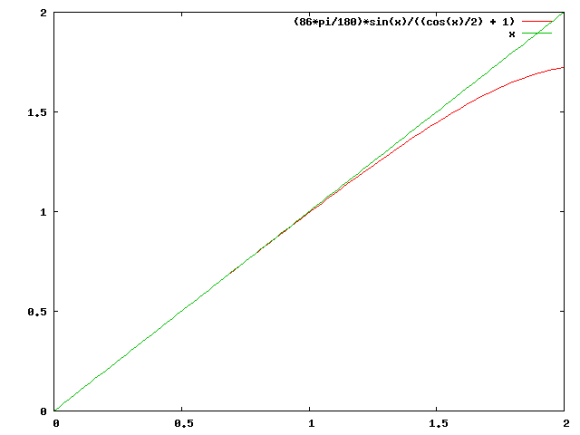 How do you think they came up with this?