As the old joke goes, “Who’s that guy next to Mazur?” 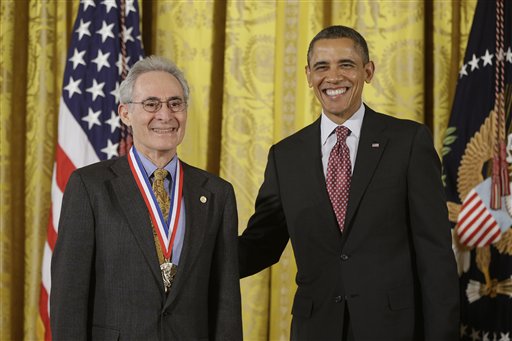 Barry Mazur, my Ph.D. advisor, was awarded the National Medal of Science last week.  It’s hard to overstate the extent to which his work and his outlook have affected the direction of number theory.  And of course my own way of doing math is substantially colored by my time studying Barry’s mathematics,  and my very good fortune of working closely with him as a student.  It seems to me that it must be transparent to anyone who talks to me that I was Barry’s student.  He taught me to see mathematics as a unified whole, he taught me that forming good questions was as important a part of progress as settling on answers, and he taught me how to say “It is what it is,” which has entered my idiolexicon as a kind of mu-like mantra.  Maybe the most important lesson I learned from him is that in mathematics it is very useful to be interested in everything.  I’m just one of 54 students Barry has advised, and I’ll bet all of us would say similar things about his influence.

Lately (on top of his continuing busy schedule of proving theorems!) Barry has been thinking very deeply about what we are doing when we think we know something.  See “What is Plausible?”, which considers the difference between gathering evidence for “all ravens are black” and gathering evidence for the Riemann hypothesis, and features guest appearances by the Cohen-Lenstra conjecture and the analogy between function fields and number fields, two of my favorite topics.  (Note to self:  “Why do we and why did we find the Cohen-Lenstra conjecture plausible?” would be a good future post.)

Via Brian Conrad, here’s a link to video of the ceremony.

I gathered a couple of reminiscences from people who worked with Barry before I knew him.

The memory of Barry’s graduate courses and seminars when I arrived at Harvard as a student in the early 70s is indelible. Barry was working through the ideas in his great paper on the Eisenstein ideal, and every talk he gave was an opening into a beautiful new world.

It’s not an exaggeration to say that the next generation of number theorists came out of his overcoat.

My real relationship with Barry began toward the end of my last year at Harvard, when I explained my thesis to him and we realized that we had many mathematical interests in common.  My thesis was about Galois representations attached to abelian varieties, and Barry’s Eisenstein ideal paper was at least partly in the same subject.  (That article covers a lot of ground!!)  I communicated with Barry quite a bit over the next few years, when I was in Princeton and in Paris.  We sent letters back and forth, and we had face-to-face discussions.  I made some tiny contributions to the Eisenstein ideal paper by pointing out to Barry a few things that he hadn’t yet come to grips with and by finding a mistake in Barry’s initial discussion of Eisenstein primes mod 2.

For me, the Eisenstein ideal article is one of the great landmark articles of all time.  It introduced a plethora of new techniques and solved a number of important problems.  One takeaway from the article for me was Barry’s insistence on studying objects just as they are, in the most delicate possible way.  Shimura would study quotients of Jacobians of modular curves by replacing them by isogenous varieties on which full rings of integers could operate.  Barry’s idea was to study the Hecke ring just as it is and not to replace it by its normalization.  What a great idea!  He also introduced the perspective of studying Hecke rings as objects of commutative algebra.  He proved (in most cases) that they’re Gorenstein, for example.  Another takeaway is that your work is not finished until you’ve sorted out every detail.  Barry wasn’t content with a result that was true outside of some finite set of primes; he insisted on going down into the exceptions to see exactly what happens there.

A central contribution of Barry’s paper was to prove that many Hecke modules that are generically of “rank N” (N= 1 or 2) are actually locally free of rank N.  One way to describe my “level-lowering” theorem is to say that, in the simplest case of representations of prime level, I prove a statement analogous to Barry’s for the one Hecke module whose local freeness he didn’t discuss.  This is the character group of the torus in the Neron reduction of the Jacobian of X_0(N) at the bad prime N.

If I’m not mistaken, Barry won two major AMS prizes for the same article — the Eisenstein article.  He won the Cole Prize when it was published and then the Steele Prize for an article of enduring value a couple of decades after it was published.  I don’t know any other example where a single article was honored by multiple AMS prizes.

4 thoughts on “Barry Mazur wins the National Medal of Science”