In 35 years of watching baseball I had never been to a postseason game, until this Saturday, when I was able to get two tickets to Game 2 of the National League Championship Series through a wonderful terrific beautiful friend with connections.

First of all, I salute whoever the free spirit was who slammed a Zima right before entering Miller Park. 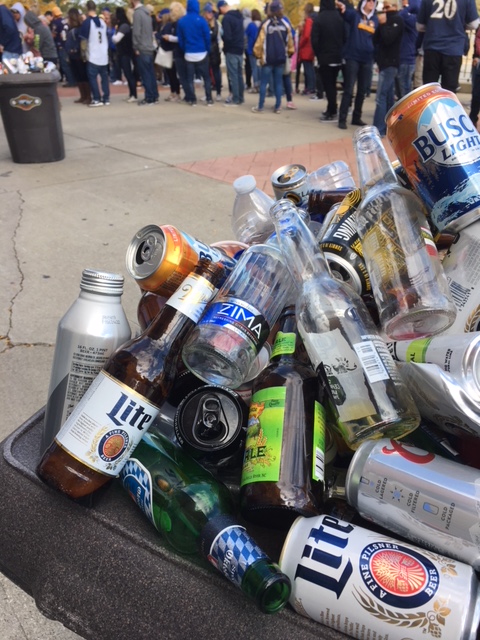 The game started at 3pm; in late afternoon with the roof shut at Miller Park there’s a slant-line of sunlight across the field which is lovely to look at and probably terrible to hit in. 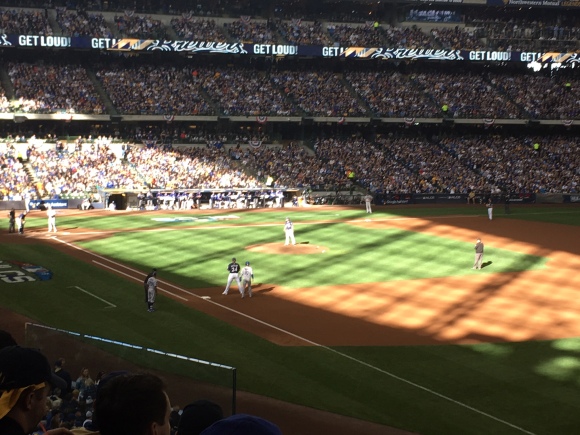 And indeed there wasn’t a lot of hitting to start with. Wade Miley, once a bad Oriole, now a good Brewer, never looked dominant, giving up lots of hard-hit balls including a shot by Jeremy Freese in the first that Lorenzo Cain hauled back in from over the wall, but somehow pitched 5 2/3 only allowing 2 hits (and collecting a single himself.) Hyun-jin Ryu matched him zero for zero. Every seat in Miller Park full, everyone attentive to the game, a level of attention I’ve never seen there. The guy behind us kept saying “NASTY, throw something NASTY.” CJ believes he sees Marlins Man in the front row — he’s right! Brewers get runners on second and third with one out, Dodgers intentionally walk Yelich to load the bases, (wave of boos), Braun delivers the RBI groundout but can’t score any more. Travis Shaw hits a solo shot to deepest center, the Brewers go up 3-0, and people start to smell win, but the Dodgers lineup has good hitters all the way down to #8 and the usually reliable Milwaukee bullpen starts to crack. Jeremy Jeffress comes in with runners on first and second and nobody out, immediately gives up a single to Joc Pederson, now they’re loaded, still nobody out, Brewers up 3-1. Manny Machado, on third base, keeps jumping off the bag, trying to distract Jeffress. But Jeffress strikes out Yasiel Puig, who’s so angry he smashes his bat over his knee. Crowd exults. Then he walks light-hitting catcher Austin Barnes to force in a run. Nobody’s up in the bullpen. Crowd panics. Yasmini Grandal comes in to hit in the pitcher’s spot and Jeffress somehow gets the double play ball and is out of it. But the next inning, Jeffress stays in a little too long; Chris Taylor leads off with a lucky little dink of an infield single and then Turner muscles a ball out to the short corner in left field; 4-3 Dodgers and it stays that way.

But the Brewers do threaten. 43,000 Brewers fans want to see Yelich get one more chance to be the hero. Hernan Perez draws a walk in the bottom of the ninth, steals while Cain strikes out. So Yelich gets to bat with 2 outs and a runner in scoring position. He grounds out. Crowd deflates. But that’s all you can ask of a baseball game, right? The hitter you want in the situation you want with the game on the line and whatever happens happens. Great baseball. Great team. I hope they win it all.  Maybe I’ll try to be there when they do.