When I was a postdoc in Princeton I subscribed to the Trenton Times, because I felt it was important to be in touch with what was going on in my local community and not just follow national news.  The only story I remember was one that said “hey, a basketball team from Akron is coming to play against a top prep-school team in Trenton, and they’ve got this kid LeBron James they say is incredible, you should come check it out.”  And I really did think about it, but I was a postdoc, I was trying to write papers, I was busy, too busy to drive into Trenton for a high-school basketball game.

So I guess what I’m trying to say is, yes, subscribe to your local paper because local journalism badly needs financial support, and maybe actually take seriously the local events it alerts you to.

It’s that time again — March Math Madness, where we fill out an NCAA men’s tournament bracket with the best math department winning every game.  As always, this bracket was filled out by a highly trained team consisting of myself and a group of procrastinating grad students, making decisions by voice vote, and if you disapprove of one of our choices, I’m sure it’s somebody else’s fault.  This is Berkeley’s first championship after falling to Harvard in 2012; meanwhile, Michigan sees its second final in three years but falls short again… 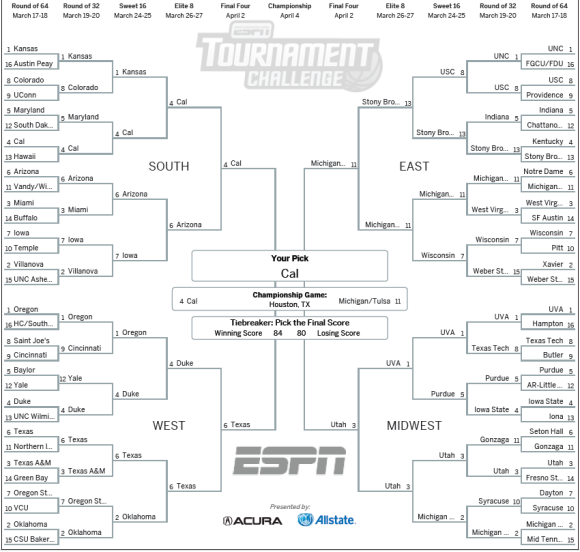 Update: In the 34th percentile at ESPN after one day of play — thanks, Yale!

Update:  Down to the 5th percentile and only Duke and UVa are left out of my final 8 picks.  Not gonna be the math bracket’s finest year.

March Math Madness is here!  Presenting the 2015 math bracket, as usual prepared by our crack team of handicappers here at the UW math department.  As always, remember that the math bracket is for entertainment purposes only and you should not take offense if the group rated your department lower than the plainly inferior department that knocked you out.  Under no circumstances should you use the math bracket to decide where to go to grad school.

Lots of tough choices this year!

It’s that time of year again!  Presenting the 2014 math bracket.  School with the best math department wins every game.  As always, all rulings were made by a group, so don’t yell at me if your department loses to one you consider worse.  Also, this year the bracket team was entirely number theorists, so the rankings are no doubt biased to overweight the people we know.  (Previously:  Math Bracket 2013.)

And here it is, the annual NCAA bracket produced by awarding each game to the school with the better math department.  Of course, these judgments are for entertainment only, and were produced by a group, so if you find any of the picks absurdly wrong, those were the ones I didn’t make.

Update: A great first day of play for the math bracket — Harvard and Berkeley advance over higher-seeded opponents and we’re in the 55th percentile of the ESPN Challenge.

Update: Second day less good as UCLA is the first of our final four to get eliminated, and we drop into the low 30s.

Update: Bracket in disarray, with only Duke remaining from the math final four. On the bright side, the math faculty at Florida Gulf Coast University includes Eric Insko, a student of my collaborator Julianna Tymoczko, and an undergrad alum of UW-Madison. So that explains nicely why they’re doing so well.

I hate to go up against Nate Silver on a subject he knows much better than I do, but is he really right that there’s a one-in-four chance that Jeremy Lin is actually a Hall-of-Fame-level superstar, based on his first four starts in the league?

Silver observes that only 41 times in the last 25 years has a player scored 20 points, shot 50% from the field, and recorded 6 assists in four straight games, as Lin did last week.  Most of those players were really, really good — about a quarter are in the hall of fame.  Michael Jordan, LeBron James, Isaiah Thomas — you get the idea.

Then, too:  Michael Jordan, LeBron James, and Isaiah Thomas were ranked as elite players before they ever set foot on a professional court.  Jeremy Lin had a strong but not dominant college career against Ivy League competition, and has been let go by several NBA teams that have watched him play.  I am as happy as anybody to see a Harvard player succeed in the bigs, but surely it’s reasonable to start with a pretty down-weighted prior.

If it’s not enough that his name is Nimrod Hilliard IV, the Madison East team is called the Purgolders.

What if every game in the NCAA men’s basketball tournament were won by the school with the better math department?  A group of us put together the alternate-universe bracket above to find out.  Note that the rules of the game forbade us from looking up anything on the Internet, so there are doubtless some matchups where our judgments are questionable or outright wrong.  If there’s a choice that really offends you, please be assured that it was the responsibility of McReynolds.

I couldn’t figure out how to make the image look nice:  if you can’t read the above, here’s a cleaner version.

Update: After one day of play, our bracket is at the 2.9th percentile of the 4 million entrants to ESPN’s bracket contest.  The plan is to make back lots of points when Cal beats Duke.

Update: Northern Iowa knocks out Kansas, who we tossed in the first round, and Washington cruises past #3 seed New Mexico to make the Sweet Sixteen, just as we predicted; and we stand at 46.2%.