I got a message last week from the husband of my first cousin once removed;  his father-in-law, Leonard Ellenberg, was my grandfather Julius Ellenberg’s brother.  I never knew my grandfather; he died before I was born, and I was named for him.

The message contained a huge amount of information about a side of my family I’ve never known well.  I’m still going through it all.  But I wanted to share some of it while it was on my mind.

Here’s the manifest for the voyage of the S.S. Polonia, which left Danzig on September 17, 1923 and arrived in New York on October 1.

Owadje Ellenberg (always known as Owadia in my family) was my great-grandfather.  He came to New York with his wife Sura-Fejga (known to us as Sara), Markus (Max), Etia-Race (Ethel), Leon (Leonard), Samuel and Bernard.  Sara was seven months pregnant with my uncle Morris Ellenberg, the youngest child.

Owadje gives his occupation as “mason”; his son Max, only 17, was listed as “tailor.”  They came from Stanislawow, Poland, which is now the city of Ivano-Frankivsk in Ukraine.  On the immigration form you had to list a relative in your country of origin; Owadje listed his brother, Zacharja, who lived on Zosina Wola 6 in Stanislawow.  None of the old street names have survived to the present, but looking at this old map of Stanislawow

So this is the best guess I have as to where my ancestors lived in the old country.  The name Zosina Wola lives on only in the name of a bar a few blocks down Yevhena Konoval’tsya: 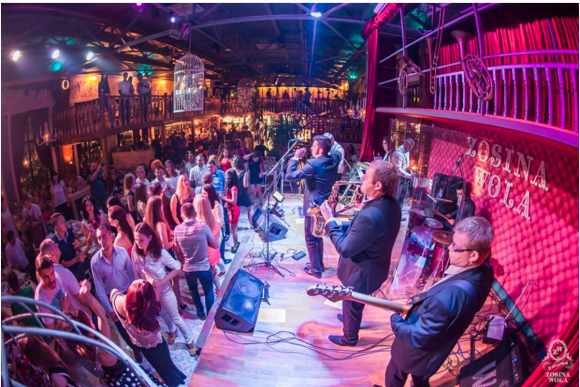 Owadje, now Owadia, files a declaration of intention to naturalize in 1934:

His signature is almost as bad as mine!  By 1934 he’s living in Borough Park, Brooklyn, a plasterer.  5 foot 7 and 160lb; I think every subsequent Ellenberg man has been that size by the age of 15.  Shtetl nutrition.  There are two separate questions on this form, “color” and “race”:  for color he puts white, for race he puts “Hebrew.”  What did other Europeans put for race?  He puts his hometown as Sopoff, which I think must be the modern Sopiv; my great-grandmother Sara was from Obertyn, quite close by.  I guess they moved to the big city, Stanislowow, about 40 miles away, when they were pretty young; they got married there in 1902, when they were 21.  The form says he previously filed a declaration of intention in 1926.  What happened?  Did he just not follow through, or was his naturalization rejected?  Did he ever become a citizen?  I don’t know.

Here’s what his house in Brooklyn looks like now:

Did you notice whose name was missing from the Polonia’s manifest?  Ovadje’s oldest son, my grandfather, Julius.  Except one thing I’ve learned from all this is that I don’t actually know what my grandfather’s name was.  Julius is what we called him.  But my dad says his passport says “Israel Ellenberg.”  And his naturalization papers 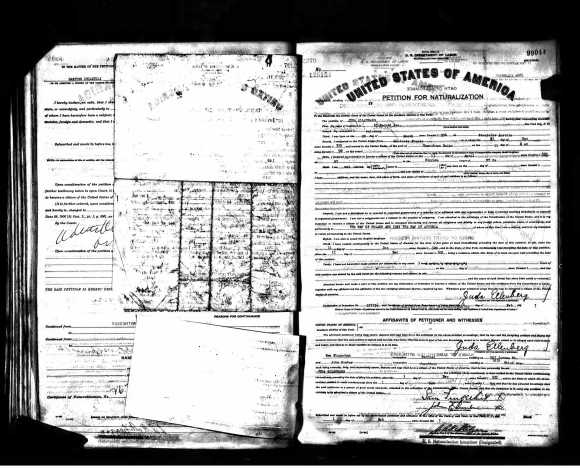 have him as “Juda Ellenberg”  (Juda being the Anglicization of Yehuda, his and my Hebrew name.)  So didn’t that have to be his legal name?  But how could that not be on his passport?

Update:  Cousin Phyllis came through for me!  My grandfather legally changed his name to Julius on June 13, 1927, four months after he filed for naturalization. 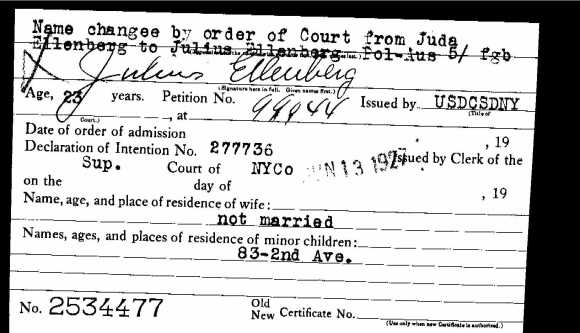 My grandfather was the first to come to America, in December 1920, and he came alone.  He was 16.  He managed to make enough money to bring the whole rest of the family in late 1923, which was a good thing because in May 1924 Calvin Coolidge signed the Johnson-Reed Act which clamped down on immigration by people thought to be debasing the American racial stock:  among these were Italians, Chinese, Czechs, Spaniards, and Jews, definitely Jews.

Another thing I didn’t know:  my grandfather lists his port of entry as Vanceboro, Maine.  That’s not a seaport; it’s a small town on the Canadian border.  So Julius/Juda/Israel must have sailed to Canada; this I never knew.  Where would he have landed? Sounds like most Canadian immigrants landed at Quebec or Halifax, and Halifax makes much more sense if he entered the US at Vanceboro.  But why did he sail to Canada instead of the US?  And why did he leave from France (the form says “Montrese, France,” a place I can’t find) instead of Poland?  (Update:  My cousin comes through again:  another record shows that Julius arrived on Dec 7, 1920 in St. John, New Brunswick, conveyed in 3rd class by the S.S. Corsican.  Looks like this ship would have been coming from England, not France;  I don’t know how to reconcile that.)

In 1927, when he naturalized, Julius lived at 83 2nd Avenue, a building built in 1900 at the boundary of the Bowery and the East Village.  Here’s what it looks like now:

Not a lot of new immigrants able to afford rent there these days, I’m betting.  Later he’d move to Long Beach, Long Island, where my father and his sisters grew up.

My first-cousin-once-removed-in-law went farther back, too, all the way back to Mojżesz Ellenberg, who was born sometime in the middle of the 18th century.  The Hapsburg Empire required Jews to adopt surnames only in 1787; so Mojżesz could very well have been the first Ellenberg.  You may be thinking he’s Owadia’s father’s father’s father, but no — Ellenberg was Owadia’s mother’s name.  I was puzzled by this but actually it was common.  What it meant is that Mordko Kasirer, Owadia’s father, didn’t want to pay the fee for a civil marriage — why should he, when he was already married to Rivka Ellenberg in the synagogue?  But if you weren’t legally married, your children weren’t allowed to take their father’s surname.  So be it.  Mordko wasn’t gonna get ripped off by the system.  Definitely my relative.

Update:  Cousin Phyllis Rosner sends me my grandfather’s birth record.  At birth in Poland he’s Izrael Juda Ellenberg.  This still doesn’t answer what his legal name in the US was, but it explains the passport!