“I do it all better”

“I was also at the exhibition of prominent French artists Bonnard Picasso Matisse etc. and noted much to my satisfaction that I do it all better.”

Self-portrait, from around the same time (this is hung at the Harvard Art Museum and is well worth a trip if you’re on campus)

A Man Who Suddenly Fell Over

Going Out of Business

There’s a certain strain of 1960s-70s visual art that’s so sunny, so optimistic, so earnest in its belief that a better world is possible and that world would be really colorful, that it makes me cheerful whenever I see it.  (Relevant:  Mexico 68 Olympics poster.)  So I was happy to go by this in the Chazen today:

But it turns out that, while Mel Bochner is actually a painter active in that era, he made this in 2013!  Thanks for keeping it going, Mel Bochner, whoever you are.  I like this a lot and I like the Chazen for putting it up.

The sculptures and paintings of this fifty-nine-year-old artist are so meticulously, mechanically polished and groomed that they rebuff any attempt to look at them, much less feel anything about them.

Koons knows how to capitalize on the guilty pleasure that the museumgoing public takes in all his mixed messages. He knows how to leave people feeling simultaneously ironical, erudite, silly, sophisticated, and bemused.

Does Koons make people feel things, or does he not?  Or are irony, erudition, silliness, sophistication, and bemusement feelings that don’t count as feelings?

Jed Perl writes well but I find his judgment strange.  About Jeff Koons I have no opinion.  But I remember his name because of the piece he wrote about Francis Bacon, which seems to suggest that people like Bacon not because of anything in the paintings, but because the artist sports a biography and attitude that appeals to mushy-minded would-be avant-gardists.  “The Bacon mystique,” Perl writes, “is not grounded in his paintings so much as in a glamorous list of extenuating circumstances.”

To me this makes no sense.  I went to a small museum which was showing some of Bacon’s paintings and I was knocked over by them.  Whoa, what is that?  I had no idea who he was, or whether he was glamorous, or whether it was cool to like him. 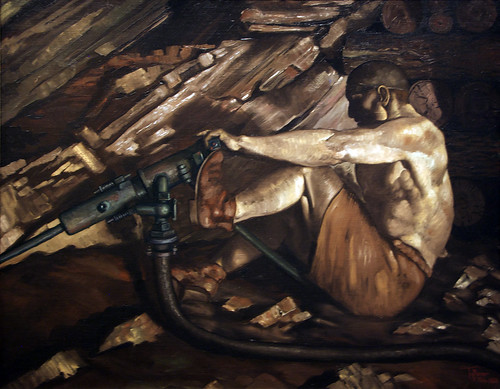 CJ and I went to the superb 1934: A New Deal for Artists show at the Chazen this weekend.  Highly recommended if you like American representational painting from the first half of the 20th century at all, or you have an inquisitive kid who likes to see what the world used to look like, or both.  Very good, historically informative title cards, too!  The best special exhibition we’ve seen there, I think.

A couple of good new pieces in the permanent contemporary collection upstairs, too:  a new Beth Cavener Stichter, this one a deer’s body with a rabbit face turned toward the viewer in an unimpressed way, and a funny Gregory Scott painting/movie about Roy Lichtenstein, which you can watch on vimeo:

Roger Brown and the Chicago Imagists at Madison MOCA

The Madison Museum of Contemporary Art has a superb exhibit of Chicago Imagism up through January 15, 2012.  I saw the Roger Brown exhibition at the Hirshhorn in DC when I was in high school, and his paintings have stuck in my mind ever since.  He’s sort of a cross between De Chirico and a Sunday newspaper comic.  And there’s some kind of Zenoistic “stillness within motion” thing going on.  He paints a lot of disasters and a lot of skyscrapers, and sometimes disasters involving skyscrapers (as in “Sudden Avalanche” at left, or “World’s Tallest Disaster,” at right (which, by the way, is the cover image of Cate Marvin’s great poetry book of the same title.)

Even the skyscrapers which don’t have disasters happening to them carry a certain sense of foreboding.

Many of the paintings in this show were gifts from the family of UW bacteriologist Bill McClain.  McClain credits the Imagists with inspiring him to have good ideas about biochemistry.  One more reason to go see this show!

CJ really liked it.  We have a new thing we do at art museums — I tell him he should look at a painting and say to himself, “What question does this make me want to ask?”  When he saw Brown’s “Skyscraper with Pyramid” (pictured in the linked profile of McClain) he asked why one of the people in the skyscraper was in color when all the rest were in silhouette.  Good question!

Anyway, great show, you can see everything in a half hour (though many of the paintings are worth spending longer on) and it’s free.  We’re lucky to have this museum in Madison and I encourage people to take advantage of it!