What I learned at the Joint Math Meetings

Another Joint Meetings in the books!  My first time in San Antonio, until last weekend the largest US city I’d never been to.  (Next up:  Jacksonville.)  A few highlights:

This is a post about Matt Kahle’s cool paper “Sharp vanishing thresholds for cohomology of random flag complexes,” which has just been accepted in the Annals.

The simplest way to make a random graph is to start with n vertices and then, for each pair (i,j) independently, put an edge between vertices i and j with probability p.  That’s called the Erdös-Rényi graph G(n,p), after the two people who first really dug into its properties.  What’s famously true about Erdös-Rényi graphs is that there’s a sharp threshold for connectness.  Imagine n being some fixed large number and p varying from 0 to 1 along a slider.  When p is very small relative to n, G(n,p) is very likely to be disconnected; in fact, if

there is very likely to be an isolated vertex, which makes G(n,p) disconnected all by itself.

On the other hand, if

then G(n,p) is almost surely connected!  In other words, the probability of connectedness “snaps” from 0 to 1 as you cross the barrier p = (log n)/n.  Of course, there are lots of other interesting questions you can ask — what exactly happens very near the “phase transition”?  For p < (log n)/n, what do the components look like?  (Answer:  for some range of p there is, with probability 1, a single “giant component” much larger than all others.  For instance, when p = 1/n the giant component has size around n^{2/3}.)

I think it’s safe to say that the Erdös-Rényi graph is the single most-studied object in probabilistic combinatorics.

But Kahle asked a very interesting question about it that was completely new to me.  Namely:  what if you consider the flag complex X(n,p), a simplicial complex whose k-simplices are precisely the k-cliques in G(n,p)?  X(n,p) is connected precisely when G(n,p) is, so there’s nothing new to say from that point of view.  But, unlike the graph, the complex has lots of interesting higher homology groups!  The connectedness threshold says that dim H_0(X(n,p)) is 1 above some sharp threshold and larger below it.  What Kahle proves is that a similar threshold exists for all the homology.  Namely, for each k there’s a range (bounded approximately by

and $(log n / n)^{1/(k+1)}$) such that H_k(X(n,p)) vanishes when p is outside the range, but not when p is inside the range!  So there are two phase transitions; first, H^k appears, then it disappears.  (If I understand correctly, there’s a narrow window where two consecutive Betti numbers are nonzero, but most of the time there’s only one nonzero Betti number.)  Here’s a graph showing the appearance and disappearance of Betti in different ranges of p:

This kind of “higher Erdös-Rényi theorem” is, to me, quite dramatic and unexpected.  (One consequence that I like a lot; if you condition on the complex having dimension d, i.e. d being the size of the largest clique in G(n,p), then with probability 1 the homology of the complex is supported in middle degree, just as you might want!)  And there’s other stuff there too — like a threshold for the fundamental group of X(n,p) to have property T.

For yet more about this area, see Kahle’s recent survey on the topology of random simplicial complexes.  The probability that a random graph has a spectral gap, the distribution of Betti numbers of X(n,p) in the regime where they’re nonzero, the behavior of torsion, etc., etc……

How much is the stacks project graph like a random graph?

Cathy posted some cool data yesterday coming from the new visualization features of the magnificent Stacks Project.  Summary:  you can make a directed graph whose vertices are the 10,445 tagged assertions in the Stacks Project, and whose edges are logical dependency.  So this graph (hopefully!) doesn’t have any directed cycles.  (Actually, Cathy tells me that the Stacks Project autovomits out any contribution that would create a logical cycle!  I wish LaTeX could do that.)

Given any assertion v, you can construct the subgraph G_v of vertices which are the terminus of a directed path starting at v.  And Cathy finds that if you plot the number of vertices and number of edges of each of these graphs, you get something that looks really, really close to a line.

Why is this so?  Does it suggest some underlying structure?  I tend to say no, or at least not much — my guess is that in some sense it is “expected” for graphs like this to have this sort of property.

Because I am trying to get strong at sage I coded some of this up this morning. One way to make a random directed graph with no cycles is as follows:  start with N edges, and a function f on natural numbers k that decays with k, and then connect vertex N to vertex N-k (if there is such a vertex) with probability f(k).  The decaying function f is supposed to mimic the fact that an assertion is presumably more likely to refer to something just before it than something “far away” (though of course the stack project is not a strictly linear thing like a book.)

Pretty linear — though if you look closely you can see that there are really (at least) a couple of close-to-linear “strands” superimposed! At first I thought this was because I forgot to clear the plot before running the program, but no, this is the kind of thing that happens.

Is this because the distribution decays so fast, so that there are very few long-range edges? Here’s how the plot looks with f(k) = 1/k^2, a nice fat tail yielding many more long edges: 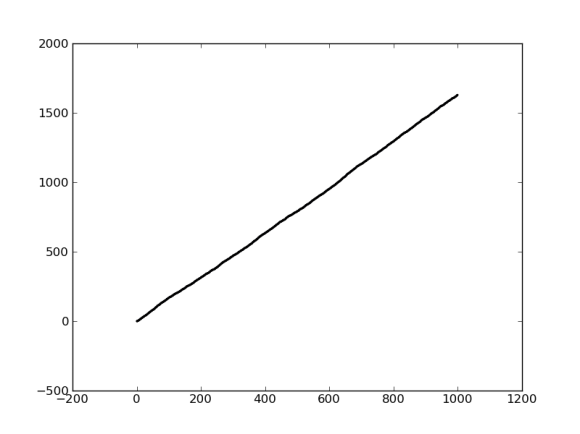 My guess: a random graph aficionado could prove that the plot stays very close to a line with high probability under a broad range of random graph models. But I don’t really know!

Update:  Although you know what must be happening here?  It’s not hard to check that in the models I’ve presented here, there’s a huge amount of overlap between the descendant graphs; in fact, a vertex is very likely to be connected all but c of the vertices below it for a suitable constant c.

I would guess the Stacks Project graph doesn’t have this property (though it would be interesting to hear from Cathy to what extent this is the case) and that in her scatterplot we are not measuring the same graph again and again.

It might be fun to consider a model where vertices are pairs of natural numbers and (m,n) is connected to (m-k,n-l) with probability f(k,l) for some suitable decay.  Under those circumstances, you’d have substantially less overlap between the descendant trees; do you still get the approximately linear relationship between edges and nodes?

OK, so a black toddler and a Chinese toddler stumble on an international drug-trafficking ring — no, actually, this is a game I just bought for CJ, a kid’s version of Nob Yoshigahara‘s classic game Rush Hour.  The object here is to get the small white truck to the edge of the board (the top edge, in the image here.)  The trucks in your way can’t move sideways or turn; they just go forward and back.

You play a captivating game like this and naturally you start abstracting out the underlying math problem.  Play Set enough and you can’t avoid thinking about affine caps.  Rush Hour has more to do with the geometry of configuration spaces; it reminds me of the “disk in a box” problems that people like Persi Diaconis and Matt Kahle work on.

So here’s a question — it doesn’t capture all the features of Rush Hour, but let’s start here.  Let X be the unit square, and let c be a parameter between 0 and 1, and let N be a large integer.  Let L be the set of line segments in X which are either horizontal of the form y = i/N or vertical of the form x = i/N.  A traffic jam is a choice of a length-c interval in each of the 2N +2 line segments in L, where we require that these intervals be pairwise disjoint.  The traffic jams naturally form a topological space, which we call T(N,c).  We say an interval (x,i/n),(x+c,i/n) in a traffic jam t is trapped if no traffic jam in the connected component of t contains the interval (0,i/n),(c,i/n).

Questions: For which values of (N,c) is T(N,c) connected?  In particular, is it connected almost always once it’s nonempty?  If not, when does T(N,c) have a “giant component”?  If there’s an interesting range of parameters where T(N,c) is not connected, what proportion of intervals do we expect to be trapped?